Catch Profound Sounds on August 18 2017 at SOBs in SoHo, New York City to celebrate the release of No Malice’s new album, Let the Dead Bury the Dead! ProfoundSounds has had the great pleasure of producing five tracks on this upcoming album. No Malice will be performing select tracks from LTDBTD. 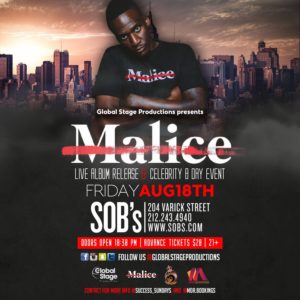